Our warehouse is filled with an ever-changing inventory of reusable material saved from Philadelphia’s creative industries. In conjunction with DesignPhiladelphia, we’re challenging you to generate new works from these previously wasted resources. Prizes will be given for the best submissions! Bonus points for project examples [pictures/links] from your own life or from your favorite artists and makers!

thursday, october 11th — industry: performing arts — material: lauan
Lauan, also known as Meranti, is the generic term in the US for tropical plywood. Thin sheets of wood veneer are glued together with the grain of each layer at a right angle to the adjoining layers, creating a strong panel. These sheet goods, commonly 4’x8’ by 1/8” thick, are used in theater and film to skin flats, which are put together to form set walls. While heavier, plywood-skinned platforms are often stored and reused, it is common practice for lightweight lauan flats to be thrown away at the end of the production’s run. 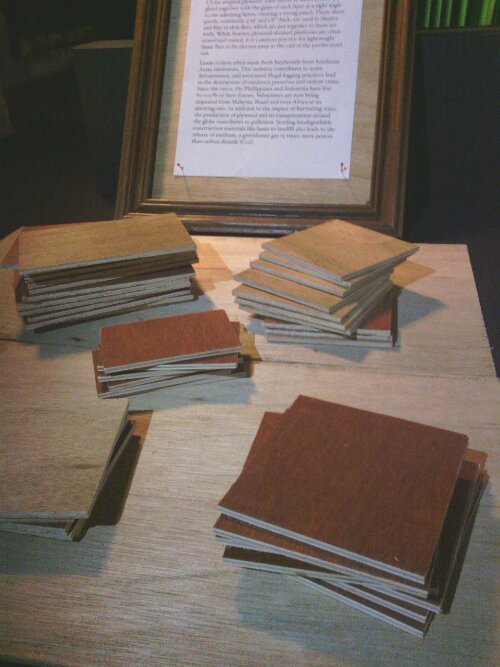 Lauan is most often made from hardwoods from Southeast Asian rainforests. This industry contributes to acute deforestation, and associated illegal logging practices lead to the destruction of rainforest preserves and violent crime. Since the 1930s, the Phillippines and Indonesia have lost 80-100% of their forests. Substitutes are now being imported from Malaysia, Brazil and even sub-Saharan Africa at an alarming rate. In addition to the impact of harvesting trees, the production of plywood and its transportation around the globe contributes to pollution. Sending biodegradable construction materials like lauan to landfill leads to the release of methane, a greenhouse gas 25 times more potent than carbon dioxide [CO2].

For more information on lauan, check out Rainforest Relief.
Leave a comment or email info at theresourceexchange dot org to submit your idea for how to reuse lauan!