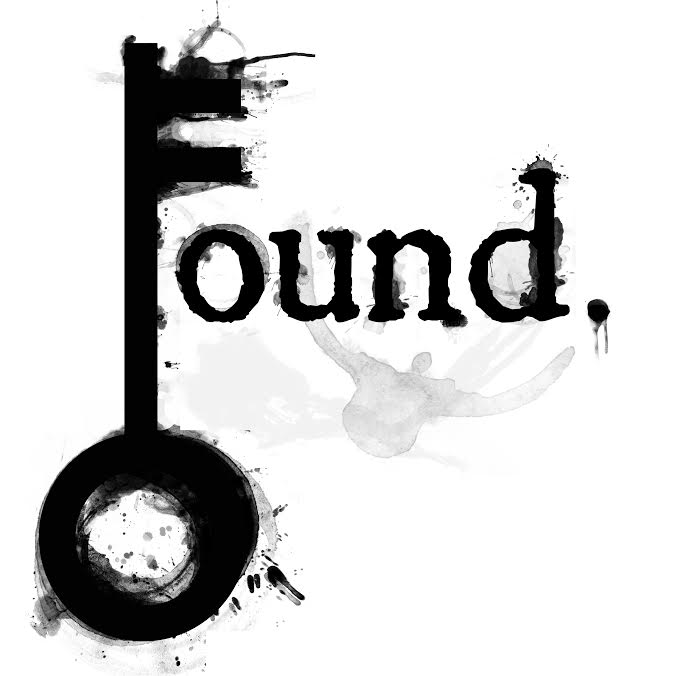 Found Theater Company often uses salvaged, reclaimed, and reused materials to make the sets and props of their productions, photo shoots, and video trailers. Not only is the reuse of material more economical for a smaller company, but it’s also way better for the environment than buying new. In fact, they’ve been using materials from The Resource Exchange for so many years, that we featured the ensemble of theatre makers as our reCreate Artists of August 2015! You can see how they used materials in productions from 2013-now on their Featured Artist Page on our website.

And now Found is at it again! Tonight is the opening night of GAME SHOW SHOW, an original production for the Philly Fringe. The set for the show is simple, and nearly all the materials to bring it to life were sourced from The Resource Exchange by set designer Tom Lombardi and Director (and re staffer) Alison Hoban. 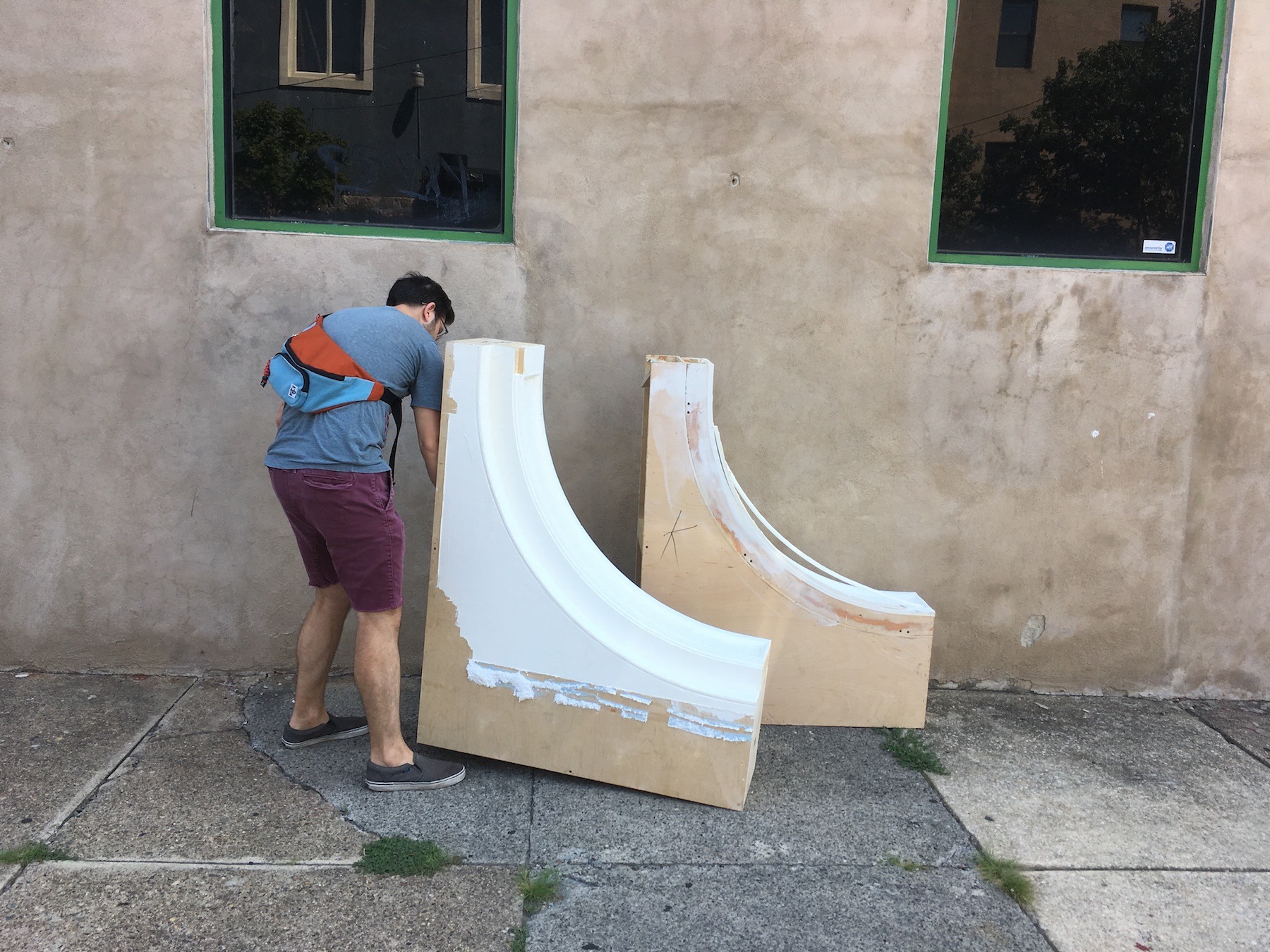 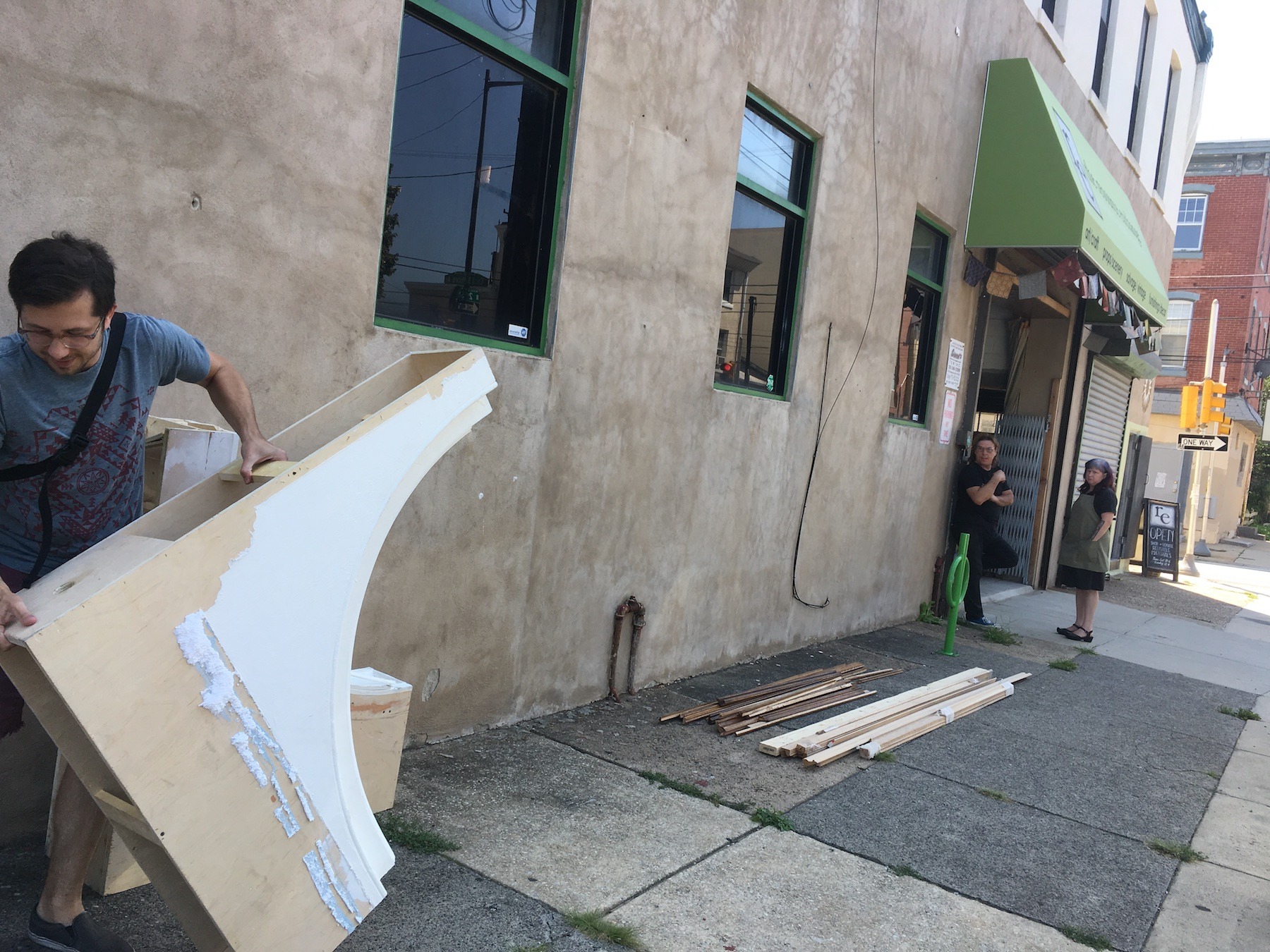 Most excitingly, the “Contestant Stand” was made from two large corner moulding pieces that the re team salvaged from the set of a major motion picture that just wrapped shooting in Philly. Lombardi patched the two pieces together to create the arching stand. All the lumber to make the host podium and the other stands in the show were reclaimed from the re, most of the pieces hot off the film set! 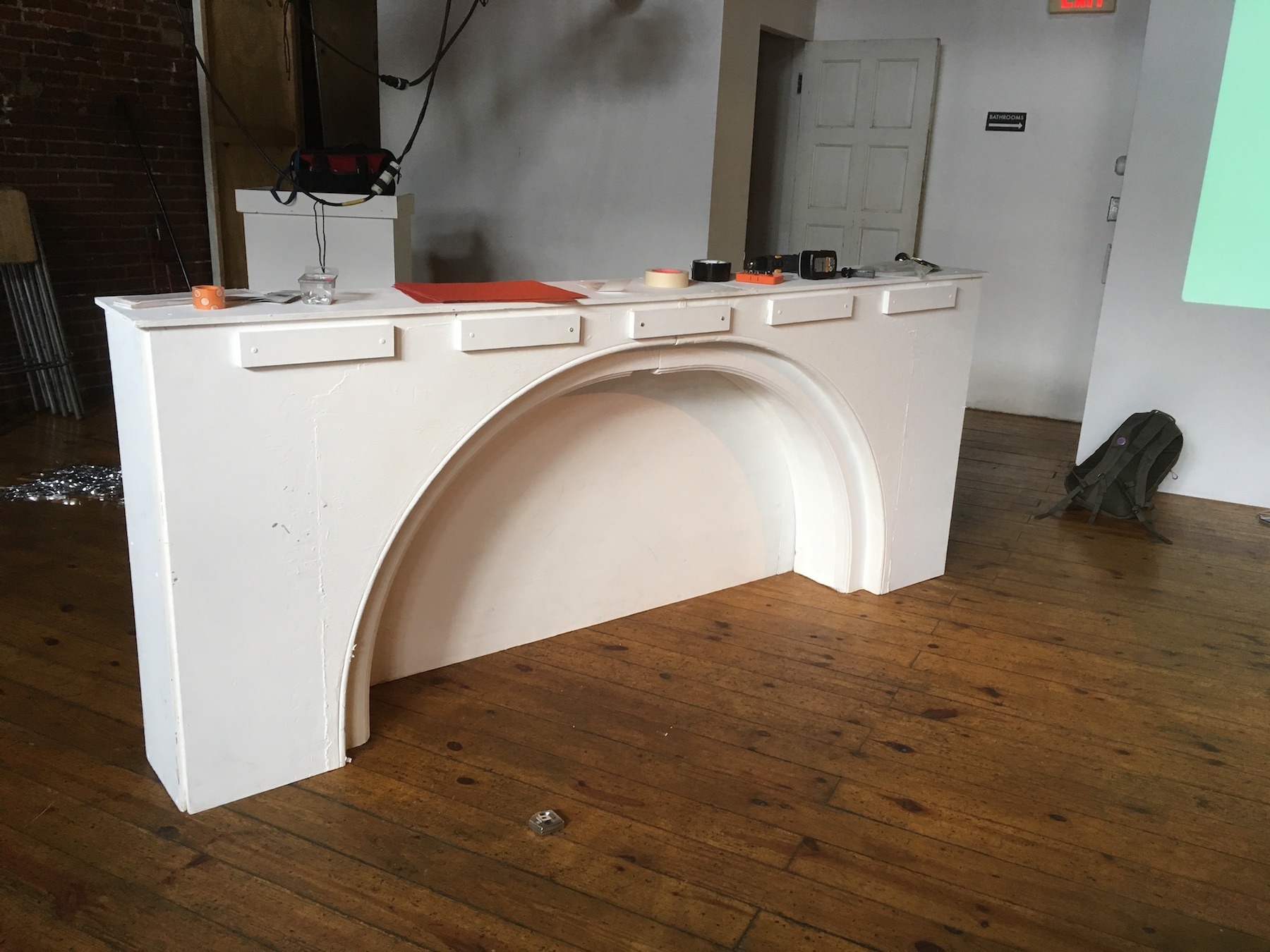 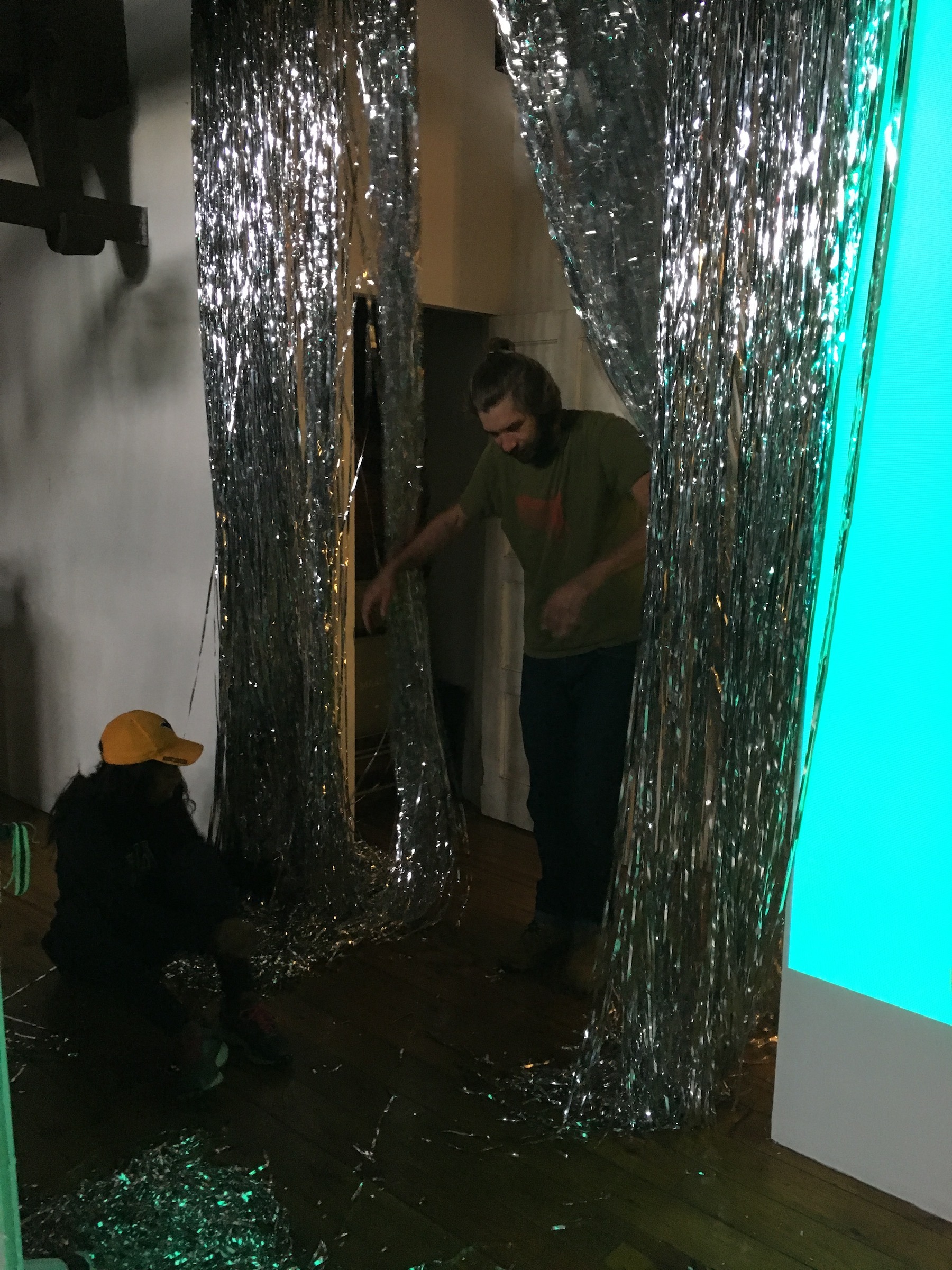 Additionally, a giant shiny curtain, fabric used to black out the windows of the MAAS building, as well as paper, markers, and other smaller props and craft materials used on set and throughout the rehearsal process all came from the re! (actually EVERYTHING in the picture below, excluding the bells and the light, either came from or was made entirely out of materials from The Resource Exchange!) And when the show is over, the company plans on donating every set piece and any reusable lumber, hardware and fabric back to the re instead of throwing the materials “away,” so that they’re available for other artists to reuse in the future. 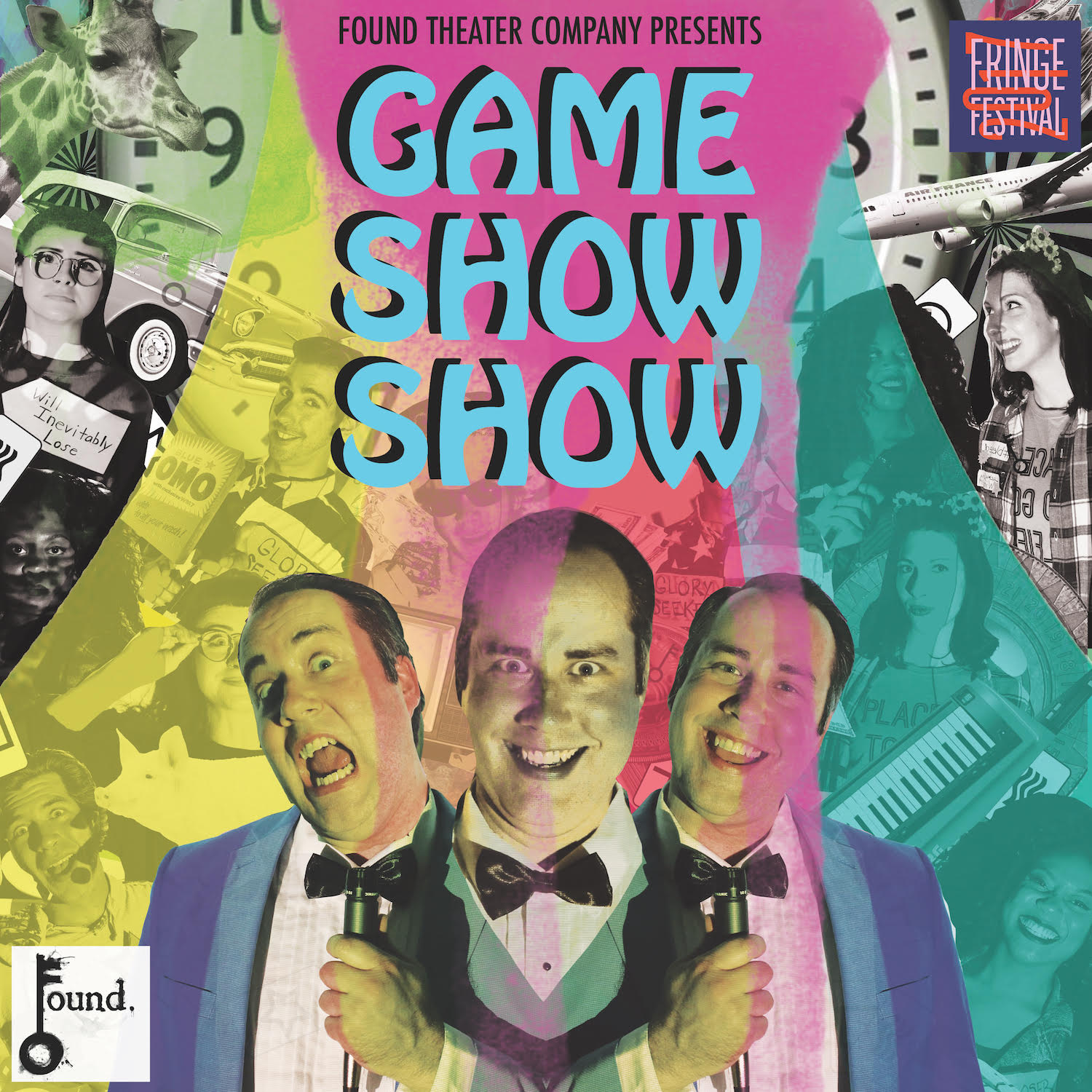 …AND the show is right around the corner from the re at The MAAS Building!