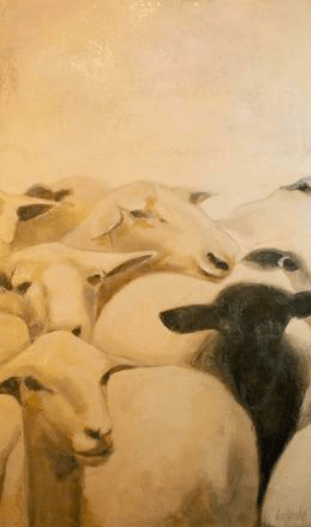 The direction of my work really began with the idea of the past. This, I know, is broad. However as a subject, it encompasses memory, forgotten places, and how we look at the past through such a veil of revision and attachment. Anything ambiguous, forgotten, dreamed of, ghost-like – are issues that I explore in the imagery and method I use in my work. I was really interested in urban exploration; buildings that were forgotten, abandoned, left to decay. What history had unfolded in these abandoned environments? These ruins are poignant, beautiful and allude to the personal history of someone or many someones. I’ll never know what has taken place in this history, or how that history has been perceived or revised or forgotten. I have only my own experience of a place, I can’t see the whole story. The gaps are where imagination can really live. I try to paint the gaps in the story. What interests me also in abandoned, decaying environments, is that it’s possible to see layers of history superimposed over one another, seeing both what it was and what it is now. The details and nuances of these places are such a rich mine for imagery. Most of the paintings that I’ve done are from series’ that explore environments such as churchyards, amusement parks, asylums. Most do not depict people. I want to keep them in their dream-like, uninhabited state, where there’s a presence that’s lingering, but maybe not seen. That’s the way I experience these images.

Clarissa Shanahan is a fine and decorative artist living in Philadelphia, PA. Originally from New York, she studied painting at the New York Academy of Art, The Art Students League of New York, and the Isabel O’Neal Studio on full scholarship. She holds a BFA from University of Pennsylvania and the Pennsylvania Academy of the Fine Arts and is a Bread Scholar, a merit based full scholarship from UPenn, the first Pafa/UPenn student ever to be awarded. In 1993, she received a full scholarship and invitation from Friends of Vielles Maisons Francaises to restore a 19th-century horse carriage in Buxy, France. A past member of the Society of Gilders, she has extensive studies and professional experience in decorative arts with private clients as well as commercial projects for American Express, Oscar de la Renta, Bendels, Fendi, Planet Hollywood, Saks and Lord & Taylor. Clarissa spent almost twenty years in the film industry as a scenic artist, producing sets for over 40 film and television productions. In addition, she produced both original and reproduction paintings for numerous productions, including the Lee Krasner paintings for the film Pollock. Her credits include Julie Taymor’s The Tempest, Salt, Summer of Sam, Angels in America and Boardwalk Empire. She is a longtime member of the United Scenic Artists 829. An adjunct faculty member of the Pennsylvania Academy of the Fine Arts since 2000, as well as Woodmere Art Museum and Fleisher Art Memorial, Clarissa teaches such varied subjects as Medieval manuscript illumination, encaustic painting, symbolism of color, as well as film-related painting classes. Clarissa is represented by Artists’ House Gallery and Carol Schwartz Gallery in Philadelphia, and has exhibited her work in shows around the country. Her work is included in numerous private and public collections.

See more of Clarissa Shanahan’s work, and find out about her classes on her website.