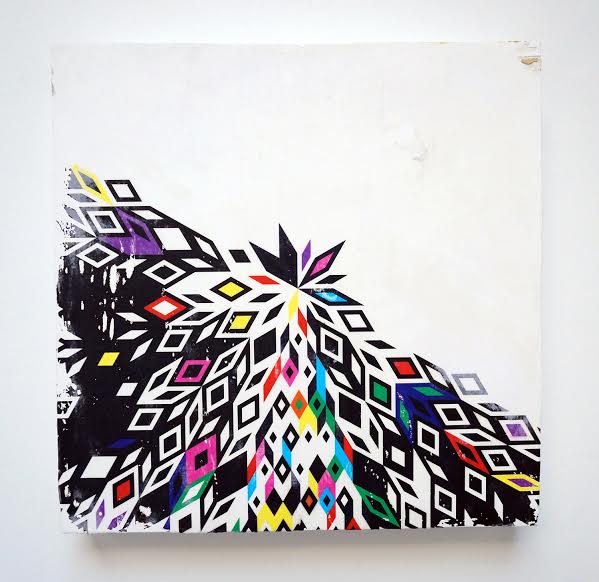 For as long as I’ve made art, I’ve been interested in creating patterns through the
repetition and rhythm of forms, marks, shapes, and gestures. My drawings, prints,
and sculptures embody these ideals.

I’ve chosen a series of prints and a sculpture that examine two basic questions: Why are patterns interesting? What separates randomness from order? I’ve turned to manmade and natural phenomena to resolve these issues. I’m interested in the patterns of Islamic decoration and its attempt to capture the grace of the natural world through geometry and repetition. These patterns, in turn, bear striking similarities to the emergent patterns of biology and geology the growth of a vine, the colonization of bacteria, or the erosion of a valley. Patterns emerge from the repetition of seemingly random constraints. My goal is to develop my own unique visual language guided by similar principles.

Design and visual art play equal roles in my practice. I embrace printmaking, product design, graphic design, CAD, woodworking, drawing, and painting as tools to manifest my ideas. In 2015, I began strip down my concepts to reveal a more basic understanding of how to progress. I moved from creating dense three-dimensional objects to super-flat hard-edged patterns using a highly contrasting color pallette. This work culminated in the series “Nine Patterns” presented here. These then influenced three-dimensional work such as that of “Accumulation Four”.

Most of my two dimensional patterns begin with a drawing, but soon move to CAD software. They are printed and transferred to a substrate. During the conceptualization of a pattern, I establish a set of rules. What is the shape and size of the repeating unit? How do they relate? In which direction will they move? I subtract areas and emphasize others to achieve a sense of tension through asymmetry and negative space, an important point of divergence from Islamic art, which insisted on symmetry and density. My three-dimensional work follows similar principles. In “Accumulation Four,” reclaimed plastic tubing was joined end to end, bent at sections of increasing size, and folded in on itself. The first section consists of fifteen three-inch units, the second of  fifteen four-inch units. Rules + variation = pattern. The effect is that of growth and progression, a network of lines, a diaspora of gestures.

I’ve been conscious of issues of sustainability throughout my adult life, but when I began to aggressively pursue art as a vocation, it became clear how wasteful my practice could be. By chance, in 2014 I rented a studio across the street from the Resource Exchange, and it became my primary source for material. I quickly transitioned from using reclaimed items for convenience and economy to actively cultivating a less wasteful workspace. I now believe that contemporary artists have an obligation to the community to produce work sustainably and responsibly.

I’ve incorporated reclaimed paint, wood, plastic tubing, plastic sheeting, fasteners, polyurethane foam, and paper into my work. Many of the tools I use from spoons for stirring beeswax to power tools purchased secondhand are reclaimed as well. Sometimes the reused material becomes the substrate for a print or a drawing (see attached image “Nine Patterns”), and sometimes it becomes the work itself (see “Accumulation Four”). The reclaimed nature of the materials isn’t evident in the finished pieces, and that transformation is important to me. I expect my commitment to the sustainable production of art to deepen, not as a novelty but as a part of a contract with future generations to create art without waste.